Though it may seem like a new thing to obsessively follow the love lives of celebs like Kim and Kanye, or Brad and Angelina, it has in fact been a subject of attention and discussion for many years! The first “power couple” to truly draw our attention, in this respect, were of course Richard Burton and Elizabeth Taylor who first fell in love in the idyllic, Mexican haven of Puerto Vallarta. These Hollywood stars were so famous that their relationship became the prime focus of the paparazzi in the 1960’s, and as a result their scandal-ridden, dramatic love story played out before the whole world. Their influence, in fact, is one of the things which turned Puerto Vallarta from a sleepy fishing village into the booming seaside vacation destination that we all know and love today.

When Burton and Taylor first met it was on the set of Cleopatra, and legend goes that they were instantly drawn to each other regardless of the fact that they were both married (he to Sybil Williams, and her to Eddie Fisher). They seemed to pay no heed to their duty to their spouses and the resulting scandal was one which the press lapped up; when Burton was cast to play in The Night of the Iguana in Puerto Vallarta he wanted Taylor with him. Each day Richard commuted to the set just south of Puerto Vallarta (in Mismaloya) near the Los Arcos landmark which just dramatically from the waves, returning at night to the village itself after a long day’s work.

During the course of filming, and for many years to follow, Burton had a beautiful casita in the village. It could be found in Puerto Vallartas “Gringo Gulch” neighborhood and afforded spectacular and beautiful views of the downtown area and Banderas Bay itself. It may come as no surprise to know that renting Casa Kimberly just across the street for Elizabeth was, for him, the perfect solution to their need to be close. It was Burton who commissioned the now famous Lovers Arch which connects the two homes (and can still be seen today) so that they could maintain their own homes whilst visiting each other as much as they wished to. Of course this bridge also stood in as a convenient escape route after one of their legendary fights.

The famous couple did get married, twice in fact, but both attempts ended in bitter divorce proceedings. It seems, in the end, that they were fonder of Puerto Vallarta than they ultimately were of each other because they remained part-time residents for many years after the filming of the Night of the Iguana. In fact, Burton bought Casa Kimberly and gave it to Taylor as a birthday gift after realizing how fond of the home she had become.

It was their influence, no doubt, that helped to turn Puerto Vallarta into the buzzing, world-class vacation spot that it is today. When you experience the tropical, warm, and romantic atmosphere of the city we have no doubt that you too will understand just how easy it is to fall in love within and with the city of Puerto Vallarta, just like Burton and Taylor. 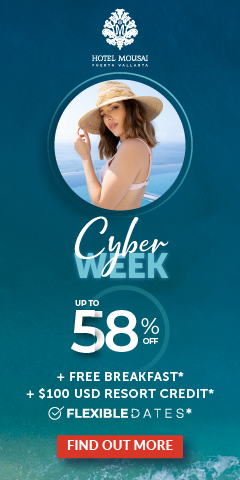